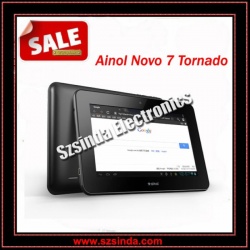 Elf II and Aurora II - Amlogic 8726-MX
In this review I want to talk about the youngest model - Ainol Novo 7 Tornados.
The tablet came in 11 days by Hong Kong mail.
The package arrived in a yellow bag, inside a box with a tablet wrapped in a pimply film.
But the best part about packaging is the stamps on the package!

Inside the box is opened "book", a separate compartment for the tablet, separately for accessories:

A set of accessories is standard: USB cable, headphones, adapter for charger, manual

Instructions with good printing, but in Chinese:

The tablet is charged by connecting the USB cable to the adapter:

Another feature of the packaging by this seller is that in the compartment with accessories the pimply film was also tightly packed so that nothing would hang out.
The seller quickly checked the tablet and set the Russian language in the settings. Judging by the open packages, the charger was also checked.
I think that such vigilance is associated with extremely low quality tablets of the entire line. We will return to quality again a little later.
Appearance
The screen is recessed literally a couple of millimeters, which is why it collects dust around the edges quite well. But the recessed screen does not cause discomfort.
The edge is made of plastic "under the metal" and looks very nice:

The back panel is glossy, very pleasant to the touch. Due to the white color prints are almost invisible.

Yes, yes, as you correctly noted, the tablet does not have a separate input for the charger. Charging occurs via USB cable through an adapter for the outlet.
Due to the low charge current, the tablet charges up to 100% in 6-6.5 hours. But as you know, charging small currents prolongs the overall life of the battery.
Also in the tablet there is no HDMI output.
On the upper left side are the power, volume and home buttons.

The screen is pretty tolerable quality. Screen resolution 840x480. But the screen does not seem grainy. It has a small light on the bottom edge, which, if not to look closely, not even visible in daylight.

But, perhaps, in the following firmware, the tablet will support 5 touches, since in the official brochure there was a multitouch on 5 points.
The touch itself is a bit "tugovat."
It is in the screen that the first problem withquality. Due to careless assembly, some instances when I click on the screen have the effect of "wave". The problem is solved by disassembling and repairing the pressure parts / wiring.
Also there are phantom touch-screen clicks. What are they connected with - with the firmware or the pressure of some parts on the screen, too, I do not know. In my copy, I did not observe phantom clicks.
The tablet has a vibration response.
Sound
The tablet has one speaker on the back panel.

The sound is very mediocre.
Wifi
But with Wifi, not everything is clear. Initially, the signal level seemed to me quite decent. But, after updating the firmware to a newer one, everything was not so rosy. 2-3 divisions already in the next room with a router.
After installing the custom firmware feiyu_mod - the signal level has become better.
But after 2 walls disappears completely:

Camera
Only front-facing camera of 0.3MP resolution is installed in the tablet. Miracles from such a camera should not be expected, but for Skype will fit.
Video
Full HD video is played without problems.

Games
In games, the tablet also shows itself well. GTA 3 works very smoothly.
But, in terms of games at the moment there is a snag, which I will discuss at the end of the review.
Performance
The tablet has a new Amlogic 8726-M3L chip installed.
Let's see what kind of performance it will show in synthetic tests:
Quadrant 2.0

As you can see, the chip is even better than the "old" Allwinner A10 in performance.
In the tablet there is a Recovery-menu, which is called by clamping the buttons "Voulme-" and "Power"

In the Recovery menu, you can update the firmware, delete all data from the internal memory card, delete only user data.
A little bit about sad
The tablet has the following problem: when downloading the cache of big games via Wifi (for example, GTA 3), after a reboot, the tablet “freezes” with the message “Preparing an SD card, Checking errors”. If you wait 30-60 minutes, the tablet comes to life. The same situation can happen again if you just copy a lot of small files to internal memory.
On the forums there is a phrase about the problem withopen reading / writing session, which is why after a reboot, the tablet starts error checking. I want to believe that this is really a software problem, not a hardware one. And it remains only to hope that Ainol will soon solve this problem.
At the moment, the tablet can be returned to life only in one way - by deleting all data (Wipe) by calling the menu of the same name from Recovery.
findings
+ Price
+ Good performance
- Poor build quality of some copies
- Bad Wifi signal level
- Problems with touch-screen
- Long charging time
- Problem with freezing after installing games with cache
In general, the tablet was very decent. But because of the problems in the software with the purchase of this tablet is better to wait.